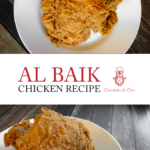 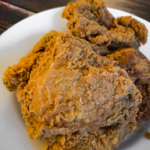 This homemade Al Baik Chicken recipe will bring all of the delicious crispy chicken joy of the Al Baik restaurants into your home. Saudi fried chicken at its very best!

Have you heard about Al Baik chicken – it’s a deliciously crispy, perfectly spiced fried chicken recipe (well, technically it’s “broasted”, but this homemade version is fried!). It’s sure to be something you make over, and over, and over again.

Okay…There’s a good chance you’ve never heard of the Al Baik franchises, or of Al Baik chicken (sometimes called broast), despite it being amongst the most popular fried chicken restaurants in the world. Ask anyone who has lived in Saudi Arabia what their top 3 memories of the kingdom are, and I can pretty much guarantee Al Baik’s fried chicken recipe will feature.

In my case, the love for Al Baik is almost comical. Every time I’d fly back to Saudi Arabia from boarding school, my first stop on the way home from the airport would be Al Baik. I’d get home, say hi to mum and dad, and sit myself down in the living room with a box of fried chicken.

It was the same routine every time: I’d come home and eat Al Baik, while watching my VHS copy of Bloodsport. (In case you’re not in ‘the know’, Bloodsport is a very old but very good martial arts movie starring Jean Claude Van Damme.)

Seriously, bestie. It’s a classic. I’ve watched it over 50 times. Do yourself a favour and treat yourself to some high-kicking secret martial arts tournament action!

(Sorry, where were we? Oh yeah. Al Baik Chicken!)

What is Al Baik Chicken?

Al Baik is a fried chicken restaurant franchise founded in Saudi Arabia in 1974 (though it wasn’t officially registered as a trademark until 1986). Though the restaurants also sell seafood, the franchise is iconic for its broasted (that is, a mix of pressure cooking and deep frying) chicken. Most meals are served alongside fries and garlic sauce.

Of course, I’d be wrong to say that I’ve made a perfect copy of Al Baik’s fried chicken recipe here. I haven’t (don’t trust anyone that tells you they have a perfect copycat recipe that you can easily make at home for any fast food…it is a “secret recipe” after all).

However, I do have a pretty darn good approximation of it. I’ve gone with recreating the spicy chicken option (because something was missing every time I tried making the non-spicy version), and I’m confident that you’ll be happy making this recipe over and over again as a means to scratch that Al Baik itch.

The 3 Secrets to Perfect Fried Chicken

I know, I know…it’s time-consuming, and requires planning in advance. And I admit, I’ve skipped the full-brine in favour of the ol’ “mmmmmmmmmmm-I’ll-leave-it-in-here-for-20-mins-that’ll-totally-work” method. But if you’re looking for perfectly moist fried chicken, then you shouldn’t skip this stage. I’ve suggested brining the chicken overnight for this recipe, but if you’re really in a pinch, I’d say you can get away with at least 4 hours.

Let your chicken come down to room temperature before getting started. Cooking the chicken right out of the fridge results in uneven cooking as the cold of the chicken will actually cool your cooking oil. No bueno, bestie.

3. Switching out the oil

I didn’t realise this would be a common issue many people face (because it is technically changing the recipe), but some years ago a friend told me about how his fried chicken tasted awfully bitter. He initially blamed the recipe he had used, but upon closer inspection, we discovered something:

He had switched out the peanut oil the recipe he was using had suggested, and instead used olive oil. That’s a no-no! You want an oil with a neutral taste and high smoke point. I use canola oil, but vegetable oil should work just fine too.

I know what you’re thinking. You’re thinking he should’ve looked over my How to Read a Recipe post. I agree. You’re right. I love how we’re on the same wavelength!

What sauce to have with Al Baik Chicken

The garlic sauce typically served with Al Baik is a version of toum. Now while, no homemade sauce will be exactly the same as a manufactured sauce, this Lebanese toum recipe is a good place to start with when you need some to accompany your Al Baik Chicken dinner!

Other chicken recipes to try

While I know you’ll love this recipe for fried chicken. Here are a couple of other chicken recipes you’ll want to try:

The links below are affiliate links. This means that if you choose to purchase using them, I will receive a small commission, at no extra cost to you. Thank you.

This is the Dutch oven I use at home. And here’s a link to the Blu-Ray edition of Bloodsport. You know you want to.

If you like what I’m doing here, and you want to help, why not go ahead and become a Patron? You can support Chocolates & Chai for as little as the price of a cup of coffee!

Let me know if you’ve ever tried Al Baik chicken in the comments below, and if you’ve tried this recipe, let me know…were we able to create that Saudi fried chicken magic? (Or just comment with your favourite Bloodsport quote!)

If you want a video, check out my Al Baik Chicken recipe video!