A petit piece of Paris centrally located in Toronto’s Yorkville neighbourhood. LS is a departure to another time and place.”

The description above comes from La Societe’s website, and it’s certainly true. La Societe’s ambience is lovely and in many ways an ode to Parisian restaurants. The dress code is smart casual, though the vast majority of the customers were dressed more smart than casual.

I’ve dined at La Societe several times now, and it is one of my favourite brunch spots in Toronto. This review is based entirely on my most recent experience there, though I may occasionally refer to past experiences at the venue.

It’s been a strange start to 2015 in that my friends and I haven’t really seen much of either. Maybe it’s the start of a new year that reminds everyone to focus on their studies, or their careers, or whatever their goals require. I know I’ve been lost in my kitchen and occasionally drowning in lines of code trying to set up Chocolates & Chai. K and R had been busy with studies, and A had just survived an incredibly tough few weeks at work.

Greetings aside, we began talking about the fallout of the Swiss Franc being unpegged by the Swiss National Bank from its previous cap with the Euro. (Isn’t it great how with good friends, the ‘hello’ is the smallest part of the conversation? Goodbyes on the other hand…) The big question was, of course, how the removal of the cap would affect businesses. But that was a long, serious discussion destined to be revisited another day as we were soon taken in by the lovely décor; we had great seats by the window, which allowed us to survey the winter storm that was taking place through the wind corridor that is Bloor Street, as well as granting us a great view of the restaurant.

And it wasn’t long before we saw them. What? The artwork. The paintings that we could not stop talking about. While certainly not the prettiest pieces of art, they proved to be incredible conversation starters as each of us honed in on a different part of the image. Was it three women enraptured in passion? Was it a woman, a crow, and a dog? Was it a woman spying on another woman as she disrobes? I’m still not 100% sure. What I do know is that it is rare that the décor at a restaurant can so completely consume a discussion.

Our first courses arrived soon enough. A and K had ordered the Cauliflower Velouté – both found it an enjoyable start to the meal, though they commented that K’s veloute was certainly much saltier than A’s. 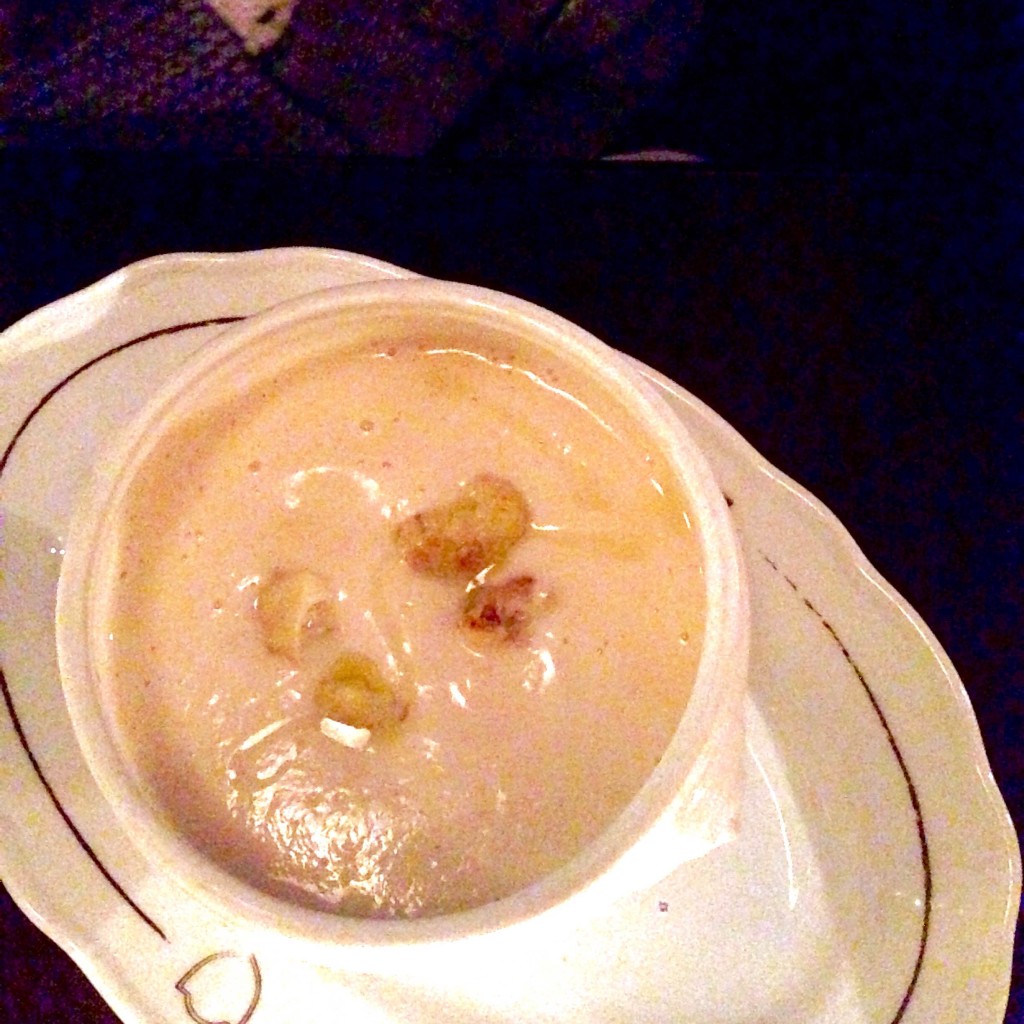 R had ordered the Three Oysters. R, by her own admission, hadn’t tried oysters enough times previously to be certain whether she liked oysters or not. Despite noting that bits of the oyster shells seemed to be flaking off, and that the oysters were very small, she felt that the dish was enough to convince her that she likes oysters. 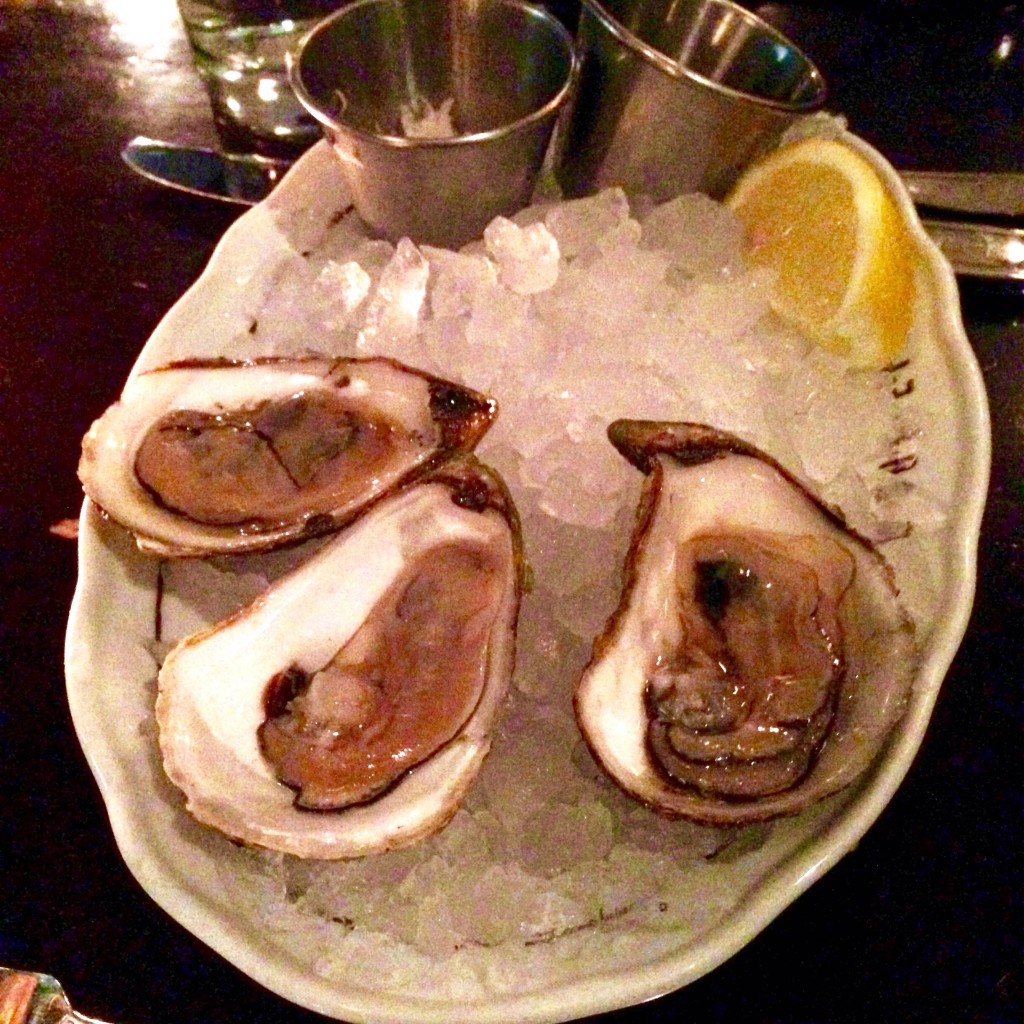 I had the Chicken Liver Mousse. It was tasty, and incredibly smooth. Seriously, I want to know how they got it SO smooth. I loved the pockets of sweetness brought on by the raspberry cells. The bread was toasted and crunchy. My only criticism would be that the greens and pickles on the plate felt like unnecessary garnishes – I would’ve preferred a little more toast instead.

For the mains: K ordered the Pan Seared Black Cod, which she enjoyed but didn’t have much else to say about it.

A and R ordered the Braised Shortrib – they both commented on how tender and flavourful it was, though R said she would have preferred a little more sweet potato on the plate.

I had the Pumpkin Risotto, which was very tasty and had a lovely creamy consistency. The addition of whipped mascarpone was a master’s stroke.

Mmm. Dessert. A and I both ordered the Warm French Chocolate Cake (served with vanilla ice cream) – it’s a classic dessert menu choice, and it’s a great one. Rich, chocolate-y, and delicious. The cake literally melted in my mouth.

K and R ordered the Classic Lemon Meringue Tart (another favourite of mine). Overall they both enjoyed their desserts though K, an avid baker herself, elaborated her thoughts on the tart in a text message to me later that evening:

Although the filling was bright and clean, unfortunately the crust really brought it down. I think a lemon tart does best with a crumbly cookie crust which is not overly sweet. The crust they chose was way too heavy. The bottom especially was floury and oily; they got the proportions all wrong, or they didn’t bake their crust blind.”

Overall, the food was very tasty and we’d definitely go back. I’m personally very interested in returning for a Sunday Lobster Night, which I’ve not tried. I’d definitely go back for brunch as the Butter Poached Lobster Benedict, alongside the Pain au Chocolat and a cup of coffee, is essentially my definition of the perfect start to a day.

Chocolate was chocolate-y, beef was beef-y, and the cauliflower was… cauliflower-y!”

However, something that let us down was how long we had to wait for the server to return so that we could ask for the bill. Service had been good up until that point, and we were lost in a very deep, very serious conversation inventing clever ways to steal the La Societe napkins to use as tea towels. (They really are quite lovely!) But come the end of the evening, our server was nowhere to be seen for a good 15-20 minutes.

And then, when we reached the main entrance to leave, the hostess was not present so we were left standing around by ourselves with our coat-check tickets in our hands for a good 10 minutes or so before deciding to retrieve our own coats. It was while we were pulling our coats from the racks that the hostess returned to inquire about our tickets (which we had at the ready).

Just in case anyone was wondering, we decided that the best way for us to steal the napkins would be for A and K to swap jackets. The jacket for A’s more muscular frame on K’s slimmer one would allow ample room for us to pad it up with napkins. Sure, K wouldn’t necessarily have looked like the flaxen-haired goddess she is with dozens of napkins rolled around her arms and waist, but what can I say? Sometimes you gotta take one for the team. What? Have you got a better idea?

Sign up to the newsletter, and become part of The Besties Club!
(Don't worry, it's free.)