Or. The Day Boulud Stole Food from Me.

Named after Daniel Boulud, a Michelin-starred chef based in New York (though recently his main venue – Daniel – lost its third Michelin Star), Cafe Boulud is as upscale as it gets. Decorated with a brazen finesse, it is situated in the Four Seasons Hotel in the Yorkville area of Toronto.

Cafe Boulud is one of my favourite places in Toronto, the food and service has always been exceptional – it’s currently the only restaurant where my friends and I have considered servers to be worthy of the title, The Zachary. But my last experience there was less than amazing. Perhaps it was the fault of the Winterlicious rush, but Cafe Boulud let me down (I didn’t even think that was possible!). But I digress, a story is best started from its beginning. So let’s go back there.

Once upon a time in the mystical land of Toronto, a festival was taking place. A festival celebrating the winter with the intention of coaxing people out of their homes to eateries, a chance to have great meals at even greater prices – Winterlicious (apt).

Bag Lady and I arrived on time. We waited as our table was prepared. Located above dbar at the Four Seasons, Cafe Boulud has a chic, extravagant style to it – not extravagant in the palatial sense, there just happens to be a ‘loudness’ to everything there. The tables, the chairs, the music, the faux graffiti-styled pop art on every wall… even the patrons. Everything is loud. But not necessarily in a bad way.

It’s standard practice at many upscale restaurants to ask their guests to wait a moment as they “prepare the table” – essentially, a last minute check to make sure that the table and its surroundings are up to scratch. Ten minutes later we were being guided to our table – one of four adjacent vacant tables, a little further to the back of the restaurant than I would have liked, but with a lovely view of usually bustling Yorkville street, quietened by snow and cold.

A moment later we were greeted by our server, who was without a shadow of a doubt, the best part of our experience there – if you’ve read about my Very Official and Serious Server Rankings Scheme (VOSSR), which I spoke about in my review of Auberge du Pommier, you’ll know that Cafe Boulud is the only restaurant with service good enough to earn The Zachary. Our server is only the third server in Toronto that we’ve decided to dub The Zachary – no small feat!

Unfortunately, the same couldn’t be said for the rest of the servers/bus boys that evening. They hustled to the faster pace of the Winterlicious crowd for sure, but they stumbled every step of the way. No, literally… I had my foot stepped on. Twice. By the same person! (The poor guy, he did apologise on both occasions.)

The meal started off with an amuse-bouche – Fava Fritters with a Piquillo sauce. Nothing fancy about the presentation or the taste. That said, the amuse-bouche is complimentary; I’m hardly going to judge a restaurant based on that. (Forgive the poor quality of the photographs, it was pretty dark in the restaurant that evening.)

Fava Fritters with a Piquillo sauce

We received our bread and butter, and our appetisers at the same time. I had the Digby Scallops, which tasted fantastic – a really wonderful balance of flavours, and a great start. 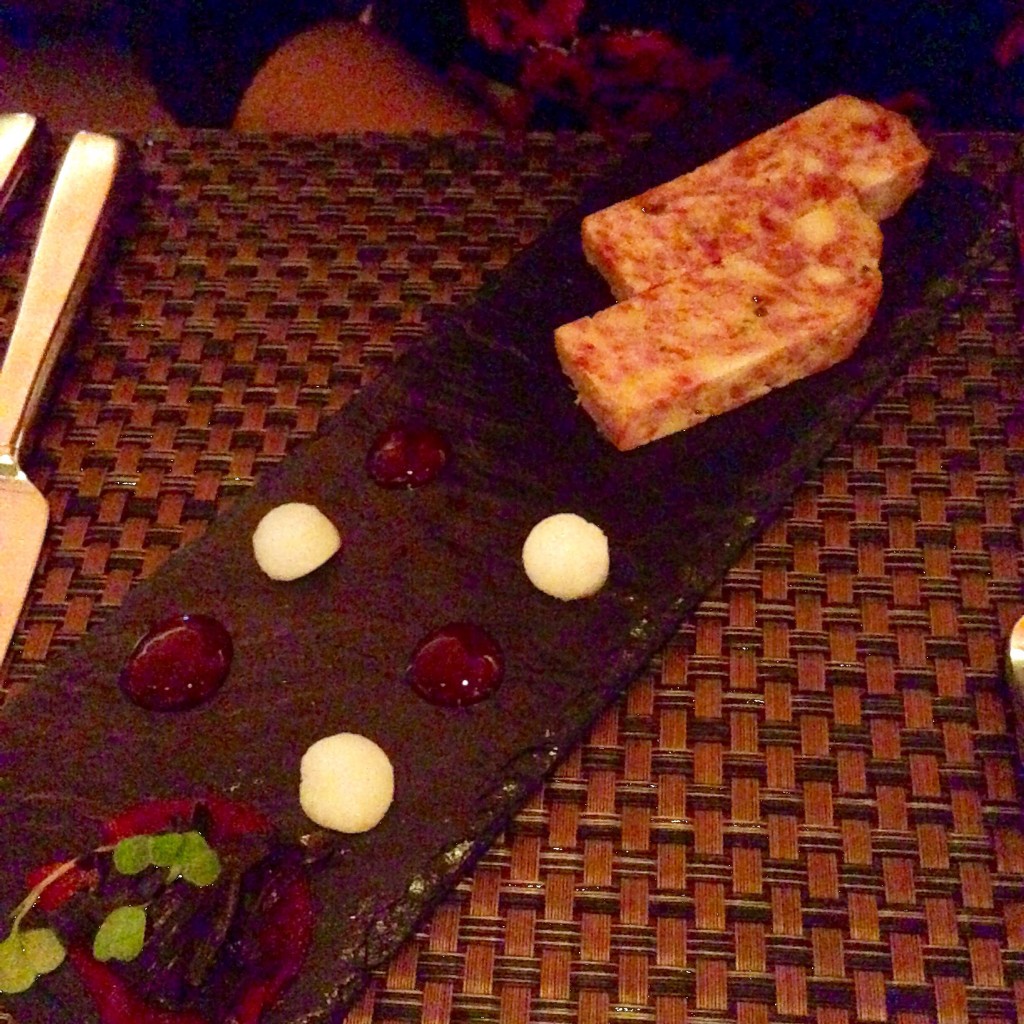 No sooner than we were done with our appetisers, the mains arrived. I personally prefer a light gestation period between my courses – nothing crazy, I don’t need 44 minutes and 7 seconds before receiving my next course, just a few minutes to breathe and talk to whoever I’m dining with.

The Artichoke Risotto arrived in a large bowl. I was ready to really dig in. The problem was that the bowl was deceptively shallow. My fork hit the ceramic bottom as soon as I dipped it into the risotto – disappointment haunted me for the rest of the meal; the same disappointment you feel when you open the cookie jar to find the remains of one, discarded, broken cookie.

Taste-wise, the risotto was lovely; the artichoke had a crisp deliciousness to it. Artichoke is one of my favourite ingredients, I wish more places would use it! My only negative comment on the actual taste is that the dish was served far too hot – this led to me having to blow on the first few bites of my food (genius, if the restaurant was looking to invoke feelings of my childhood… but somehow, I don’t think that was quite the case!).

Funnily enough, Bag Lady’s first criticism of her meal, the Cumbrae Beef “Pot au Feu”, was that it was served too cold – it’s like they balanced out the temperatures of our meals. In addition to that, the amount of bone marrow on the plate was disappointing. Otherwise, the stewed beef was incredibly tender – without a doubt the star of the meal.

Once done with our mains, I thought I’d get a chance to finally try out the bread and butter, a guilty pleasure of mine. I was wrong. Within moments of buttering my bread, a busboy took away my plate!

While I do commend the busboy’s overall ninja-like prowess, I had my food taken from me before I was done, without warning (at the risk of sounding melodramatic, it all just happened so fast!)! A nervous busboy stepping on my foot by accident is fine. But taking food off my plate? Not cool, man.

As I mulled over what I possibly could have done to deserve such a cruel comeuppance, our server (The Zachary) came by to ask if we wanted him to hold off on dessert for a few minutes. He had realised that our meal had been rushed. He was right. I checked my watch, it had barely been 40 minutes since we arrived for our reservation.

The Zachary returned with our desserts a little later, apologising once again for the rushed meal. He explained that food just tends to “zoom out of the kitchen during Winterlicious”.

The Pear Chocolate Gateau, though nicely presented, was underwhelming. I honestly can’t remember much else about it.

The Tropical Fruit Sundae was much better (though not well presented). Traditionally, I’m not the biggest fan of coconut-based desserts. It’s something that runs in my family. Coconut-based curry? Great! Coconut-based ice cream? Ermm….not so much. Bag Lady had ordered this dessert, but the fact that I had almost half of it leads me to believe that it was more than just good. Bag Lady enjoyed it a lot too. 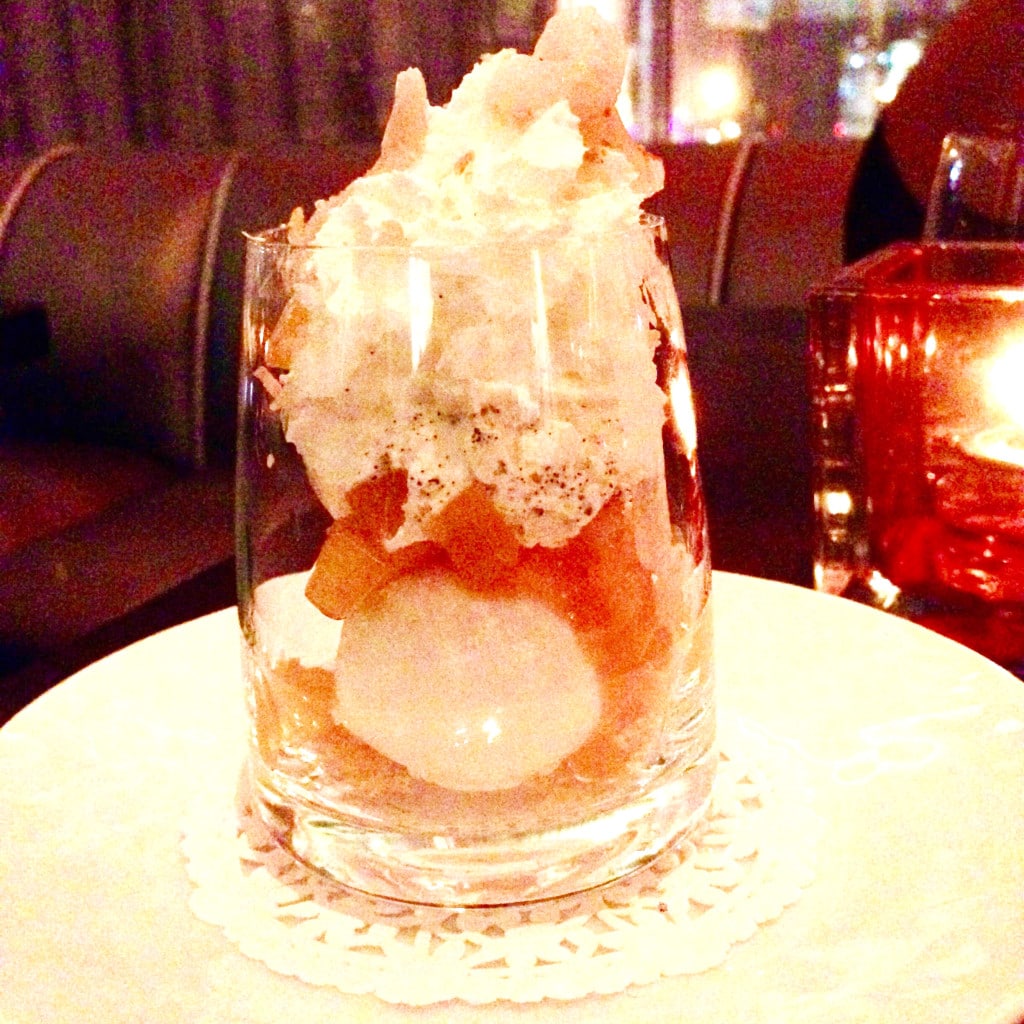 I’m torn on how I want to rate my Winterlicious experience at Cafe Boulud. I’ve had great experiences there before, and our server was fantastic. The food was a mixed bag ranging from delicious to passable. The pace was far too rushed, and the poor state of the affairs (in regards to the busboys) is quite inexcusable at such a high-end venue.

Did you go to Cafe Boulud this Winterlicious? What do you think of the place? Comment below and let me know!