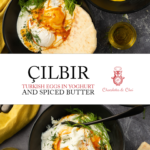 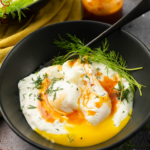 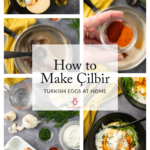 Çilbir is a traditional Turkish breakfast recipe that places perfectly poached eggs into a bowl of spiced yoghurt, and tops it with delicious melted butter. If that doesn’t have you drooling, it was also a favourite breakfast of Ottoman sultans as far back as the 15th century. And why is that relevant? Because I want you to know that I treat you like royalty, your high-bestie-ness.

If you happen to follow me on Instagram, you may remember that I spent some time in Turkey last year. While I was only there for a very short while (literally, two layovers), I made sure to be as efficient as I possibly could be with my time – I checked out some of Istanbul’s main tourist spots, got to know some locals, and of course…learnt as much as I could about Turkish cuisine and culture.

When I asked one of my guides what the quintessential Turkish brunch dish is, he took a moment, before cautiously responding, “Çılbır.” I asked him why it took him so long to answer. And he replied, “Because it’s very good. I like to eat it at all times.”

And I think that says a lot.

Çilbir is a Turkish breakfast food made of poached eggs on a bed of garlicky yoghurt, drizzled with melted butter, made slightly spicy with the addition of Aleppo pepper.

It’s worth knowing however, that çilbir doesn’t actually mean “poached eggs in garlic-spiced yoghurt”. During the Ottoman era, the term was a catchall word for all sorts of poached egg dishes. However, I’m told that the version we know today, was favourite of the Sultan Abdul Hamid II.

(Any Turkish historians here? I’d love to confirm this as I’ve only found one source on the internet that actually names Sultan Abdul Hamid II. Everything else I’ve read uses a generic reference to “Ottoman sultans”.)

Incidentally, the proper way to write çilbir is çılbır. I’ll be using çilbir as this is how it is more commonly written in the English-speaking world. And because the ‘undotted I’ can really throw off anyone that isn’t used to seeing it.

I’m not sure why the ç (aka. cedilla) is more widely understood here in the west. (Probably because it’s still used in French, though the pronunciation is different.)

What is çilbir served with

Though it can be eaten by itself, çilbir is often served alongside warm bread. If you’re not a fan of pita bread (like I’ve used), toasting any crusty bread will work great as it adds a little crunch to a dish that, while still delicious, doesn’t have a lot of textures by itself.

Aleppo pepper and its substitution

Aleppo pepper (also known as pul biber or Turkish red pepper) is a red chilli flake common in Turkey and Syria, though you do occasionally see it feature in other Middle Eastern cuisines. It’s not as spicy as the red chilli flakes common to North America. Flavour-wise, it has an earthy undertone with a very slight sweetness.

While it’s available in many supermarkets, it’s not always easy to find. A simple (albeit, imperfect) substitute is mixing half a teaspoon paprika with half a teaspoon of red pepper.

Eggs are a breakfast staple worldwide. And while they’re all quite different from these Turkish eggs, here are a few other recipes I know you’ll love:

The link below is an affiliate link. This means that if you choose to purchase using them, I will receive a small commission, at no extra cost to you. And that would be so very lovely of you. Thank you.

It’s hard to create a replacement for Aleppo pepper. Your best bet is the pick up the real thing.

And with any recipe that’s as visually simple as this cilbir, it’s worth grabbing a snazzy bowl, to dress up your presentation.

Çilbir. Or çılbır. However you choose to spell it, it’s a wonderful breakfast dish (that honestly, makes for a great lunch or dinner too), that’s sure to be a showstopper and favourite the next time you roll it out at brunch.

If you’ve made this çilbir recipe, or have tried it before, please do comment below and tell me what you think. If you’ve visited Turkey at any point in your life, tell me all about your experience there!

That’s all for today your royal bestie-ness!

Buy me a coffee

Eat like royalty with this Turkish breakfast recipe for çilbir – poached eggs and spiced yoghurt, topped with melted butter infused with a touch of Aleppo pepper.

Fill a saucepan up to 1½ inches deep with water and bring to the boil. Place the yoghurt into a heatproof bowl that’s large enough to sit over the pan and stir in the garlic and salt. Place the bowl over the pan, making sure the base doesn’t touch the water. Continue stirring until it reaches body temperature. It should have the consistency of lightly whipped cream. Turn off the heat, leaving the bowl over the pan.

Melt the butter gently in a separate small saucepan until it begins to turn brown. Turn off the heat, stir in the olive oil, followed by the Aleppo pepper, and set aside.

Boil a 4-qt. saucepan of salted water. Reduce heat to medium and add vinegar; swirl the water to create a miniature whirlpool. Crack 1 egg at a time into a bowl and gently slide the egg into water – you want to poach so that the white is firm, but yolk is still runny, about 3 minutes per egg. Using a slotted spoon, transfer eggs to paper towels to drain.

Divide the prepared yoghurt between two shallow bowls, top each with a poached egg (or two, depending on how you roll), drizzle with the butter, garnish with a few torn sprigs of dill, and enjoy alongside some warm pita bread.