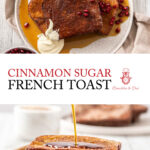 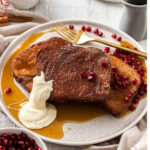 Here’s the situation, bestie: it’s Saturday morning, you’re still feeling Friday night. You’re tired. You want to cook up a delicious breakfast but you don’t quite have it in you to do anything too complicated. Enter Cinnamon Sugar French Toast. It’s exactly what it sounds like, and it makes for a delicious twist to your standard weekend French toast recipe.

What is Cinnamon Sugar French Toast

The key ingredients for this recipe are:

All your standard French toast tips will apply when making this cinnamon-sugar French toast.

Starting with bread, you want a day-old/stale bread. Something rich like brioche, or challah. You can even try something like Hawaiian sweet bread!

When soaking your bread, make sure to give it a little time to fully soak in the custard. A quick “custard-wash” will likely result in a center that is a bit dry.

Don’t over-soak your bread, otherwise it’ll fall apart. This isn’t the worst thing in the world, you’ll just have to pivot your brunch expectations (and maybe do some impromptu marketing to your kitchen audience) quickly into cinnamon sugar French toast bits!

Toppings can take your breakfast recipe from good to great, so always know how you want to pair your cinnamon French toast with a delicious and complimentary topping.

Milk – if you want a slightly lighter option, you can swap out the half-and-half for whole milk.

Breads – choosing the right bread is key to delicious French toast. Ideally, you’re looking for a rich, almost cake-y bread. However, if you have nothing else available to you, standard white bread will work fine.

This recipe will keep in an airtight container for 1-2 days. (It’ll be terrible if you try to freeze and thaw!)

The link below is an affiliate link. This means that if you choose to purchase using it, I will receive a small commission (at no additional cost to you). These small commissions help keep Chocolates & Chai going. Thank you.

Rejoice, bestie! There’s no special equipment required for this recipe. A large flat dish will be handy however for when you need to soak your bread.

If you like what I’m doing here, and you want to help, why not go ahead and become a Patron? You can support Chocolates & Chai for as little as the price of a cup of coffee!

And that’s it for today! What did you think about this Cinnamon-Sugar French Toast recipe? It’s pretty easy, right? Let me know in the comments below.

For the French Toast